Seeking adult, active members who would like to become involved in the leadership of the American Simmental Association. If you attended BIF or the National…
read article

It was a Grand Slam National Classic

If you’ve ever been on a traveling tournament team, you know the unique situation we find ourselves in at AJSA Classics. We are competing against one another,…
read article

As Simmental and SimAngus TM breeders, Erika and Roger Kenner provide their customers with diversified genetics that are productive in a commercial operation and outperform in the feedlot.

Situated with the rugged-plains landscape of Leeds, North Dakota, as a backdrop to their productive ranch and farmland, the Kenner Simmental Ranch produces profitable Simmental and SimAngus™ genetics for their commercial customers. Through their commitment to collecting data, implementing a progressive breeding program, and providing top-notch customer service, Roger Kenner and his daughter, Erika, develop a wide range of bulls proven to work for their customers and produce the carcass their customers’ buyers want.

“We have a lot of customers who have different bull needs. As seedstock producers, we’re not trying to tell our customers what they need,” Roger shares, explaining that their customers are looking for a range of bulls from performance sires to heifer bulls. “We develop purebreds and composite Simmental and SimAngus in red and black. We try to put a range of well-built animals in our sale each year. Some of each category so as to make sure the customer has what their cow herd needs to be profitable.” 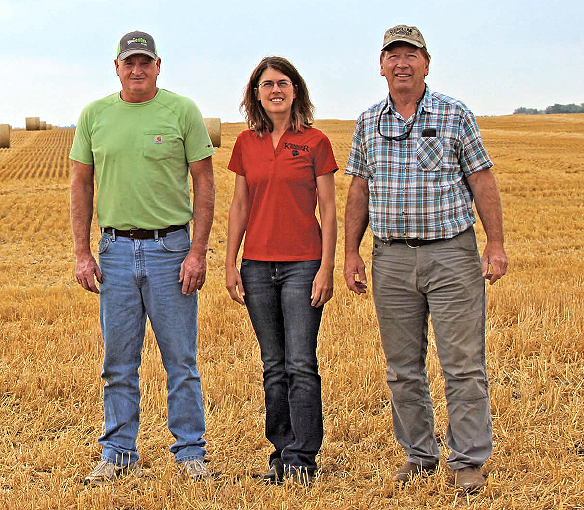 Built on Data and Performance

“While our area doesn’t require as much pasture per animal unit, structure and soundness are huge for us and many of our clients,” Erika says, describing how bull efficiency and
longevity are factors in providing a quality animal to their customers.

The shift in the Simmental and SimAngus breed in the early 2000s provided more marketing avenues to commercial producers selecting for extra hybrid vigor. “Simmental went through a bad time,” she explains, delving into the bad reputation Simmental had in the commercial industry in the late 1990s for hard calving and extreme frames. At a time when Simmentals weren’t popular, SimAngus proved to the commercial industry how they work in a crossbreeding system. “They were also able to test the waters and we were able to prove we had improved the breed. Now many are seeing the benefits of the SimAngus female
and like to make their own halfbloods.”

The Kenners utilize both Simmental and Angus to develop bulls with calving ease and a manageable frame score. She continues, “In our environments, we have found our bulls to be the most efficient at a six-frame
score. They’ll put good pounds on their calves, cows will breed back, and they’re coming in with good condition.”

All cows are bred with one round of AI before being cleaned up with a high-quality bull. Kenner Simmental Ranch breeds 350 cows each year, and implants an additional 100 embryos in their own herd and about
120 more in a cooperator herd each year. “We utilize ET and AI to take our herd where we want to be going more efficiently,” Erika explains. A large portion of making breeding decisions is based on the data
they are collecting on their cow herd and the carcass grading results from those genetics once they’re on the rail. “I have so many spreadsheets that it’s actually kind of a joke around the ranch,” she laughs. Everything from birth weights, weaning weights, yearling data, and carcass ultrasound to mature dam data is collected and used in their selection decisions. “When we’re selling a bull, we will use phenotype
and numbers to make selections. They need to measure up weight-wise because pounds still sell. They have to be sound, they’ve got to have easy fleshing ability. We also look at their EPD profile, feet, and disposition.”

To ensure accurate EPDs, the Kenners actively report all phenotypes on the whole herd to their association. In recent years, they have participated in research projects to DNA test their entire cow herd and calf
crop, called Cow Herd DNA Roundup and Calf Crop Genomics. She explains, “The DNA gives us a whole other level of accuracy that we haven’t had before. Some of the trait accuracies are enhanced to an equivalent of more than 20 calves reported to a cow. That’s huge when you’re using EPDs to make selections.” 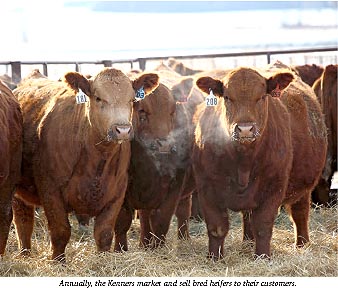 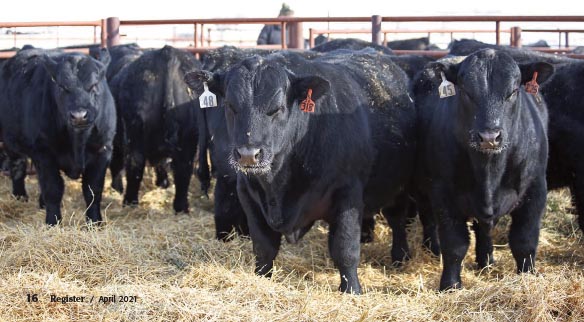 Another benefit to the DNA testing is that all cows and calves are parent-verified. “By DNA testing our cow herd, we’ve guaranteed that what we’re selling is exactly what we say it is,” she explains.

Developing genetics for their buyers that will grade Choice while deliberately retaining balance in other traits is top priority. “At the end of the day, we believe in providing our customer a balanced animal,” Erika says.
“While we use EPDs and indexes, we’re not just looking at one number or one index. We consider the big picture. We probably move the bulls along in the carcass value a littleslower than others, but we refuse to give
up everything else to get there.” 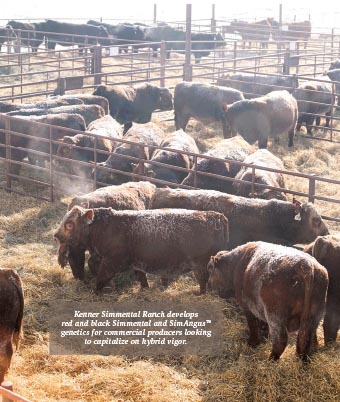 Each year, 60–70 steers are fed at Chappell Feedlot in Nebraska. After harvest, the carcass data is used to find areas of improvement. “We feel it’s important as seedstock producers to know how cattle are grading because our clients are commercial cattlemen. They are all going to be selling steers to feedlots and we want to make sure that our genetics are really going to work.”

Kenner shares that when they first started getting carcass data back, their cattle were grading 70% Choice, but after making adjustments to their breeding program, the cattle are now grading 90% Choice or
higher. The data has been helpful in improving their bottom-end cattle, Kenner explains, “The cattle we’re sending to the feedlot are our culls that didn’t make the bull sale. Our calves aren’t the perfect source to
get carcass data back on because they don’t represent what our customers would sell to a feedlot, but after years of doing this, we’ve made improvements in our whole breeding program.”

This past February marked Kenner Simmental Ranch’s 25th anniversary bull sale. For many years, the family sold private treaty off the farm. When they discovered that hauling multiple semi-loads of bulls to Mandan and Bismarck was too cumbersome, they transitioned to hosting a sale each year.
In 2010, they built their own sale barn on the ranch, where they annually sell 120–130 bulls and 70 bred heifers in person and online. By incorporating the online sale option, their buyers have more flexibility during the unreliable weather in the beginning part of the year. Roger says, “We’ve also found that the risk of injury is much lower and it is a lot less stressful for the cattle on the day of the sale.”

A large benefit to buying bulls from the Kenners is the sale guarantee. If the customer has any problems or concerns, the bull they purchase can be exchanged. To ensure that they can provide their customers with quality genetics in case of an accident, a few sale-quality bulls are held back to be available for buyers.

“We want 100% customer satisfaction,” Erika says. “We keep the extra bulls around so that we can make sure that we can replace a bull if it gets injured. Accidents happen and we hope our buyers know that we will make sure they have a valuable, high-quality bull to breed with.” 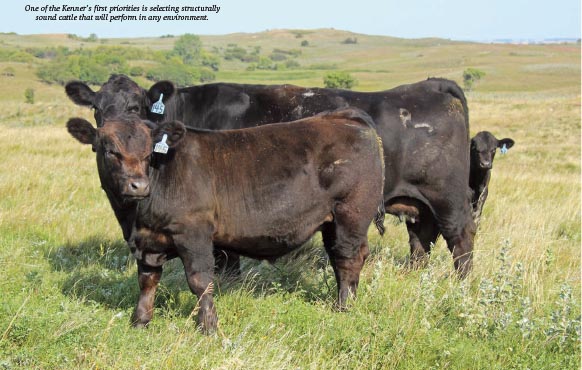 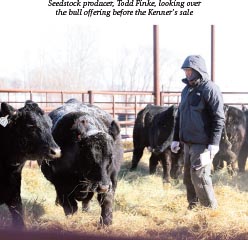 Diversified with a Great Crew
In addition to cattle ranching, the Kenners raise between five to ten different crops each year and are part-owners of a frozen food company. Much of the farming is small grains like spring wheat and barley, but they
also grow corn and beans including black turtle, pinto, and soybeans.

“Believe it or not, our major business is our grain farming,” Erika says, explaining that because of their climate and soil type they can produce a variety of crops throughout the year.

For the last 28 years, Roger has also been involved in the pasta industry. He was one of the founding board members for Dakota Grower’s Pasta, a farmer owned co-op where local farmers contributed their durum to the
plant. More recently, he is a part owner for a frozen-food company in Leeds.

For both the cattle and farm operation, the Kenners feel lucky to have employees that make their operation successful. Erika shares, “Labor is a major challenge for farmers and ranchers. Finding people who want to work on a cattle ranch, especially in northern North Dakota, is not always easy. We’re fortunate to have a great crew that works with us, and they’ve been working with us for many years.”

Along with the sale anniversary, 2021 marks the twenty-fifth year working with their herdsman Bryan Leapaldt. Leapalt lives on the ranch and manages all the daily operations and other employees. He also plays a large role in the breeding plans each year. Roger says, “Bryan is an essential part of our ranch for daily operation and providing customer service. He works with the customers just as much as Erika and I do.”

At the end of the day, the Kenners feel successful when they know they’ve improved their customers’ bottom lines. Erika concludes, “We understand that herd bulls have a large impact on our customers’ breeding program for years to come. We do the homework for them. We help them minimize risks by providing a balanced, reliable Simmental and SimAngus bull to advance their herd.” 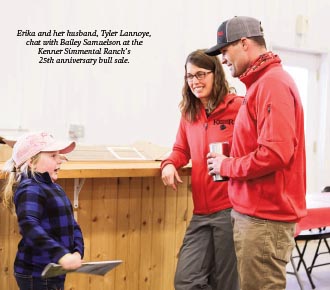