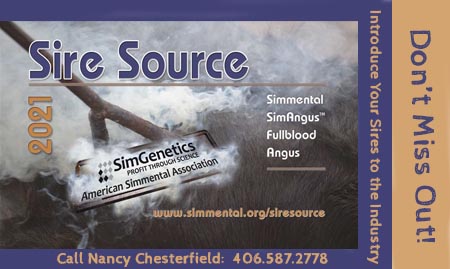 Modern Seedstock Marketing Must be Better

February 14, 2021 Industry News ASA
By Lane Giess | If we take a trip down memory lane, we can remember a day when marketing seedstock could be described as simple compared to today. We would mail a sale catalog with the date and time of our auction, inside would have general information about…
read more

February 12, 2021 Industry News ASA
Through pooling information, the International Genetic Solutions offers better selection tools to seedstock breeders and the beef industry. By Jackie Atkins, Ph.D Early in life, we are taught to share. Share with our siblings, share with our classmates, share…
read more

Trichomoniasis, more commonly known as “trich,” is a highly contagious venereal disease that can wreck a herd’s reproductive efficiency. A sound preventive program will help avoid abortions and ongoing losses at a time when every calf is vital to the bottom line. “Preventing trich is one of the best ways to protect profits,” said Eric Metteauer, DVM, a veterinarian in Beaumont, Texas. When Metteauer moved to southeast Texas in 2013, numerous herds in his client base were infected with trich. Now, with intense management, he hasn’t had a bull test positive in two years. \ “Trich can be devastating from an economic standpoint because of the high calf-crop losses,” said John Davidson, DVM, Senior Associate Director of Beef Cattle Professional Services, Boehringer Ingelheim. He has seen decreased calf crops in trich-infected herds of up to 50 percent.

“The economic impact of this venereal disease in a cow herd is felt through lower weaning weights due to delayed breeding, testing of potentially infected bulls, and replacement of infected cattle,” Davidson added. “Beyond replacing cattle, ongoing surveillance to ensure the herd is trich-free plus vaccination of the herd cost money, too.”

“The first trich-infected herd I dealt with had 36 of 50 bulls test positive,” noted Metteauer, who provides service to beef herds in a 100-mile radius of his clinic, ranging from 20-cow herds to 8,000-cow herds. “We’ve seen trich in a wide array of herds with all kinds of management practices.”

When herds have problems with conception rates and lower pregnancy rates, trich is often the diagnosis, but testing must be done to confirm. “If pregnancy rates are reduced by a large amount, we want to palpate the cows and determine if they have had longterm damage to their reproductive tract, or if they are carrying mummified fetuses,” Metteauer explained. “If this is the case, then we have to attack trich from the cow side and not just the bull side.”

“The trich vaccine can help cows fight the disease and save a pregnancy with proper timing, although pregnancy is not a determining factor for infection in all cows,” said Davidson. “The vaccine has been proven to reduce the shedding of Tritrichomonas foetus, the disease-causing organism, thereby helping to reduce the spread of the infection throughout the herd.”

When the vaccine is given the first time, Davidson stresses the importance of giving a booster two to four weeks following the first dose. The second dose needs to be given 30 days prior to breeding season. This helps exposed animals fight the organism causing the disease. Cattle that have previously been vaccinated only require one dose.

“The problem with trich is there is no legal treatment in food animals,” Davidson asserted. “Bulls become permanently infected and need to be disposed of properly. While cows can develop an immune response to the disease, about five percent are permanently infected, and the others often don’t have a viable pregnancy.”

He continued, “Leased bulls can be a problem as they are often not tested in between movement of cow groups. I recommend that a 30-day trich test be done on all bulls prior to turnout.” When a herd tests positive and some bulls test negative, he said it is important to retest the negatives two weeks later to ensure their status. Herd bulls should also be tested after breeding season to help with surveillance of the disease.

“Running virgin bulls can help, but I even recommend testing them just to doublecheck and prevent any problems,” Metteauer advised. “Testing bulls going to slaughter can help with surveillance of trich as well.”    Davidson and Metteauer agree that every herd is different and talking with the herd veterinarian to develop a preventive plan or a plan to fight the disease is the best option.