Weaning is considered one of the most stressful periods in the productive life of a beef calf. During the weaning process, calves are exposed to various stressors that include removal from their dam, physiological changes (actively developing lean tissue or muscle), castration, vaccination, dehorning, exposure to a novel pen or pasture environments, possible changes in feed and water sources, and, for many spring-born calves, exposure to seasonal climate changes. These various stressors (individually or in various combinations) can result in tremendous challenges to the calf’s short-term and long-term health, gain performance, and economic viability. Calves that are sick or become sick during the first 30 days at the feedlot typically have lower daily gains, increased costs of gain, and reduced carcass quality and tenderness (Fulton et al., 2002; Gardner et al., 1999; McNeill, 1999).

Depending on how cow-calf producers market their calves, the aforementioned challenges can vary in their impact on the producer. Producers that retain ownership of their calves through the feedlot until slaughter are directly affected by all health and gain variables, whereas producers that market calves at weaning may not see the post-weaning impacts, but their reputation as a source of feeder calves may diminish, resulting in reduced future weaning prices. From an industry perspective, how we manage our calf crop — pre-weaning, at weaning, and post-weaning — can have dramatic effects on economic viability, consumer acceptance, and end-product quality.

Pre-weaning management is important to ensure that calves have the ability to perform and function when exposed to the stressors associated with weaning. The nutritional status of the calf determines how well the calf will mount an immune response to vaccination and the challenges associated with the stress of weaning. Pre-weaning diets should be balanced in protein, energy, minerals, and vitamins to ensure calves’ health, welfare, and performance.

Further, immune responses to vaccination are not immediate; therefore, it is suggested that ranchers vaccinate calves 2–3 weeks prior to weaning in order for the calf to be immunologically prepared for the stress of the weaning process. Accordingly, the Superior Livestock Vaccination Program, with the objective of promoting value addition to the calf crop, recommends two preweaning protocols (VAC 24 and VAC 34). All calves should also be castrated, dehorned, and branded prior to weaning to alleviate as much as possible the stress associated with the weaning process.

Weaning Strategies Calf stress can also be minimized by implementing strategies that modulate the degree of separation from the dam, incorporate slow changes in diet, and capitalize on the familiarity of the environment. There are several different weaning strategies or combinations of strategies that can be used, and examples are described in Table 1. 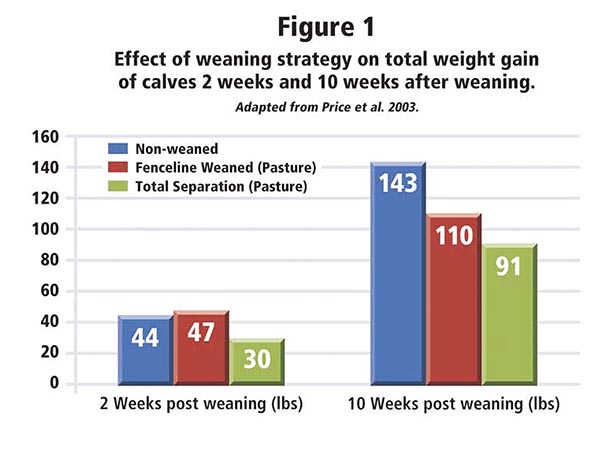 Two-Stage Weaning The two-stage weaning method uses a device to prevent the calf from suckling the cow, such as rings attached to the calf’s nose. This method has been shown to reduce behavioral signs of calf stress after weaning compared to traditional weaning methods; however, subsequent beneficial effects on calf performance are still questionable. As an example, Haley et al. (2005) reported that calves assigned to the two-stage weaning strategy:

This is after complete separation from the dams and compared to calves assigned to traditional weaning.

Weaning calves reduces the nutrient requirements of the cow. It will allow the cow to transfer nutrients previously going to milk production to her own body function, improving her own condition and preparing for the next calving. Cows that calve in moderate body condition score (BSC) (5 or 6) are able to recover, cycle, and become pregnant sooner than cows that come through the winter in poor condition (less than 4). This is particularly important in young cows that have additional requirements of growth.

Considering a 1,200-pound cow and a 350- pound calf, forage consumed prior to weaning is around 37 pounds of total forage per cow-calf pair, compared to 24 pounds of total forage consumed by the weaned cow (assuming calves are sold or managed in a drylot). Consequently, profit generated by the ranch system as it relates to the weaning strategy adopted must include breeding efficiency, feed utilization (including grazed pasture/rangeland and winter harvested forage), calf performance, and marketability.

Beef calves are traditionally weaned between six and eight months of age. However, cattle can be reared on forages and concentrates as early as 90 days of age. In fact, weaning at 90–120 days of age can be accomplished with proper nutritional management of the calf.

Early weaning (EW) calves can be a tool to increase the breeding efficiency of the cow herd by improving BCS, particularly during a time of forage shortage and/or poor condition of the cow herd. Research conducted at the Eastern Oregon Agriculture Research Center in Burns demonstrated that:

This weight difference resulted in a subsequent reduction in winter feeding costs of roughly $29.00/head in EW cows compared to that of TW cows. Early weaned calves fed concentrate diets beginning at time of weaning have comparable weight gains to those of nursing cohorts.

Feedlot performance of EW calves, however, has been variable and highly dependent on the age at weaning, as well as the nutritional and management background of the calf prior to and after EW.

Nevertheless, the profit of a cow-calf operation is highly influenced by the management and marketing of the calf crop. The EW calves must be fed a nutrient-dense diet that almost always includes some sort of concentrate, and requires increased labor. Typically, if EW calves are not retained for a period of time, EW reduces the gross income of the ranch. However, in situations where the reproductive performance of the cow herd is enhanced, and/or feed utilization and costs are improved, the cost of EW may be justified.

Management of the post-weaned calf will vary depending on the marketing program adopted by the cow-calf producer. Regardless of the marketing option, there are a couple of management aspects that must be evaluated to ensure maximal return on investment.

The Superior Livestock Vaccination Program also recommends specific vaccination protocols for calves that are weaned and then maintained at the cow-calf ranch for a preconditioning period before shipping to the feedlot (VAC 45 and VAC Precon). Basic nutritional management should be followed to ensure that calves receive adequate nutrition and will respond efficiently if a preconditioning approach is adopted.

Depending on the weaning strategy incorporated, the level of stress should dictate the type of nutritional management. Typically, a higher level of stress increases the need for energy, protein, and minerals. Unfortunately, stress causes depression in intake; therefore, a highly palatable and digestible feed source is preferred.

1. Use of high-starch feedstuffs (corn, barley, etc.) provide highly digestible energy, but can also result in rumen disorders (bloat, acidosis) if calves are not properly acclimated to these feedstuffs.

2. Forages (grass hays, alfalfa, etc.) can provide adequate levels of protein but can be marginal in the quantity of digestible energy (especially in highly stressed calves). Calves typically prefer digestible forages over grains, so palatability and intake are usually not a major issue with these feedstuffs. Also, high levels of dietary roughages will typically help maintain stable rumen fermentation, thus reducing the chances of digestive disorders.

3. The third feedstuff source would be non-forage fiber sources, such as soybean hulls, distillers grains, or beet pulp. These sources are typically rich in digestible energy and contain decent quantities of digestible protein.

Most non-forage fiber sources are highly palatable, and complement forage and grain sources that may also be fed. Recently weaned calves also need to have unrestricted access to a clean, abundant water source at all times. From a mineral standpoint, calves that are highly stressed (and may show signs of dehydration or scours) may require specific macro- and micromineral nutrition to ensure water retention and proper immune function, depending on the mineral content of forages and feedstuffs being offered.

Weaning is one of the most stressful periods in the productive life of a beef calf, and directly impacts the calf’s short-term and long-term health, gain performance, and economic viability.

Management alternatives to alleviate stress — and ensure that the calf’s immune system is prepared to cope with the challenges associated with weaning — benefit the welfare and productivity of the calf crop.

Currently, there are several options for pre-weaning, weaning, and post-weaning management of calves, each one with its specific advantages and disadvantages. Therefore, cow-calf producers should examine carefully the available options, and determine which one to use, if any, based on the needs and particularities of their production systems.