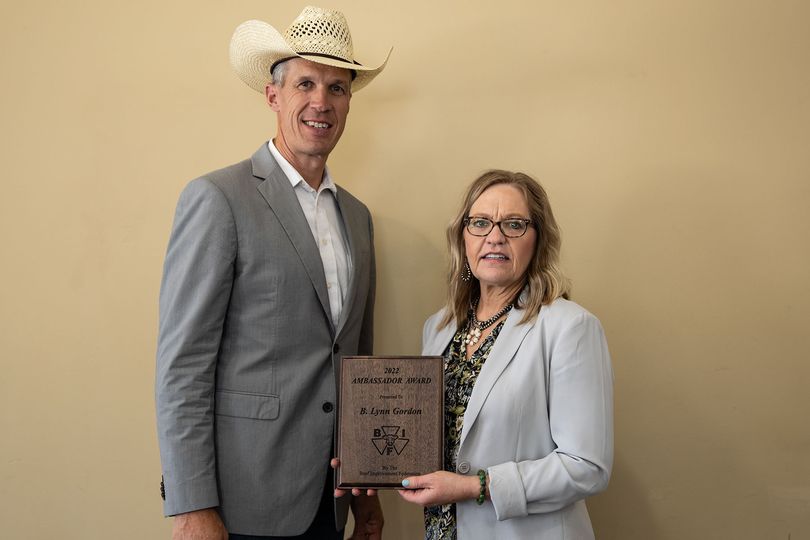 The Beef Improvement Federation (BIF) presented Dr. B. Lynn Gordon the BIF Ambassador Award on June 2 during the group’s annual symposium in Las Cruces, New Mexico. This award is presented annually by BIF to a team or member of the media for his or her efforts in spreading the BIF message and its principles to a larger audience.

Gordon has an enthusiastic passion for the beef industry and has dedicated her career to fostering beef improvement through her roles working with breed and state associations, the Extension service, as a freelance writer, and most recently as an agricultural leadership and marketing consultant. She began her career working for the University of Minnesota Extension Service and then pursued roles as an education and communications director for state and national beef industry organizations, including serving as editor of publications at the Red Angus Association of America and the American Hereford Association.

Throughout her career, Gordon has contributed to the beef industry as a former Livestock Publications Council board member, a livestock photographer, editor, and freelance writer often featuring articles about generations of seedstock families and the changing role of genetic evaluation, as well as many leadership topics. In 2019, Gordon attended the World Angus Conference in Uruguay as a media representative. Some publications Gordon’s byline has appeared in include: BEEF, Progressive Cattle, Hereford America, Joplin Cattlemen’s News, The Stockman, and several Canadian publications.

“Gordon has a long history with the Beef Improvement Federation. She attended her first convention in Sheridan, Wyoming in the mid-90s, followed by attendance at 10 more conventions throughout her career,” says Burt Rutherford. “She was instrumental in overseeing nominations of several Outstanding Seedstock Producers from Nebraska. Plus, she assisted the promotional team in 2001 when the event was in Wichita, Kansas, and served on the planning team for BIF in 2002 when it was hosted in Omaha, Nebraska.”