Cattle, Computers, and the Climate:

How computer simulations can help create a sustainable beef industry      |

The environmental sustainability of beef production has become a topic of interest for today’s consumer. According to the Environmental Protection Agency (EPA) the agriculture sector accounts for about 10% of the national greenhouse gas (GHG) emissions every year. Ruminant methane production alone accounts for about 3% of total GHG emissions. It’s true that other sectors have larger GHG footprints (transportation at 29% and manufacturing at 23% of the national GHG emissions). Nonetheless, agriculture as a whole, and the beef industry in particular, has the potential to position itself at the forefront of sustainability.

A simulation is essentially a computer program that uses mathematical models that describe how a system (like beef production) operates. In combination with real-world data, they can be used to make predictions or obtain estimates of production factors or inputs. They generate insight into outcomes of a complex system if a single variable changes, or the implications of a specific combination of several variables changing together. This flexibility is the reason researchers at Kansas State University chose to use a simulation to evaluate the land and water use of cow-calf operations in the Great Plains.

Quantifying the environmental impact of a region as large as the Great Plains was not a simple task. As any producer knows, different locations require different management. To account for variability, the Great Plains was divided into 74 regions with similar weather, forage availability, and cattle types. From there, the researchers used publicly available information to paint a general picture of what a cow-calf operation might look like in each area, with the goal of establishing starting parameters to reasonably approximate diversity. For example, the herds simulated in western Texas were allocated roughly 35–40 acres per pair to graze and were supplemented prairie hay, whereas 7–9 acres per pair and brome/alfalfa hay supplementation was modeled for herds in eastern South Dakota. This real-world information was provided to the simulation which then predicted land and water use of each area. Three of these areas are detailed in Table 1. Note, this was not to compare the environmental impact of different regions to each other, but to illustrate the diversity seen within the Great Plains. 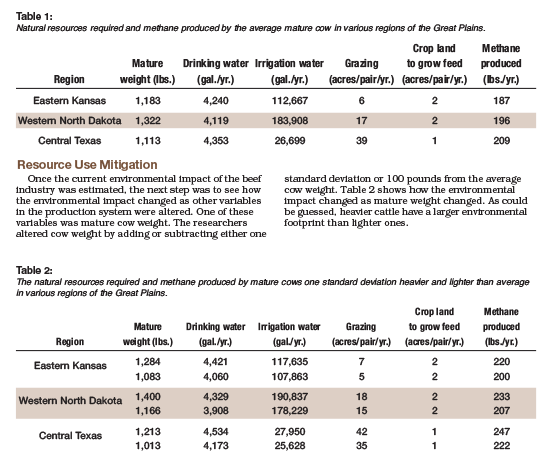 A simulation is only as good as the data that goes into it. For the Kansas State simulation, a lot of data describing forage quality and rations were approximations. More specific information about what kinds of forages are commonly grazed or the formalizations of rations delivered to grazing cattle in different areas would have helped make the simulation results more accurate. For example, in the tables above, the irrigation requirement for central Texas is much lower than the irrigation requirement for the other two areas. This is partially because cattle in that region were found to be lighter and therefore required less feed overall; however, the primary reason is the researchers assumed the diet delivered to cattle in that area consisted mostly of non-irrigated prairie hay and dry distillers grain (a feedstuff that puts most of its water footprint on the ethanol industry). If the researchers assumed the hay was irrigated or other crops were fed, those irrigation numbers would be radically different.

In addition, simulations are constructed around specific assumptions. For example, the simulation used by Kansas State was based on the amount of grazing land needed for 100 cattle. However, it could have used a specified land area — say, 100 acres — and evaluated the carrying capacity of the land in terms of a smaller herd of large cows versus a larger herd of smaller cattle.