Genetic correlation may not be a term that is commonly used, but it is an important one when it comes to genetic evaluations and understanding EPD results. Genetic correlations play the role of using information from one trait to predict the performance of another trait. Within seedstock production there are many examples of genetic correlations in practice.

Genetic correlations allow for the measurement of indicator traits that may not have been able to be recorded on an animal. An example of this is the use of ultrasound data on seedstock animals to help predict differences in carcass performance. While it may be obvious, this technology is important to be able to gather information on animals to help predict genetic differences. There are other instances where this approach has also been taken. There are many people who look at birth weight information to help predict calving ease. While the birth weight of an animal is a valuable indicator of calving ease, it does not perfectly predict this outcome.

From a genetic evaluation perspective, genetic correlations are leveraged in the evaluation to improve the accuracy of the prediction of the trait. Almost all EPD calculations are performed using multiple trait models, which means that information from multiple traits is used simultaneously in the evaluation to boost the accuracy for each of the traits included. Take, for example, the growth trait genetic evaluation. This includes data for birth weight, weaning weight, and post-weaning gain. All of these traits are included in the model, and the EPD that are calculated are Birth Weight, Weaning Weight, Yearling Weight, Average Daily Gain, and Milk. The reason that these traits can be combined is that there are genetic relationships among the traits. Another way to think about this is that calves that tend to be heavier at birth are heavier at weaning. This is due to the fact that some of the underlying genes that influence an animal’s birth weight can also influence the resulting weaning weight of an animal. The percentage of genes that are common to both traits can be expressed as the genetic correlation between those traits. So, the stronger the relationship, the more genes that are shared and vice versa.

Correlations can be classified based on the strength of the relationship. Generally, genetic correlations are considered high if they are 0.50 or above, moderate if they are 0.20 to 0.40, and low if they are below 0.20. While these aren’t considered a rule, looking at the strength of the relationship can help to determine if selection for one trait may cause a change in another trait. An example of  this is the relationship between selection for growth traits and for intake in animals. The correlations between different measurements of growth and intake are strong in nature. Therefore, when additional growth in performance is selected, we would also expect the amount of feed intake to also increase on that animal. 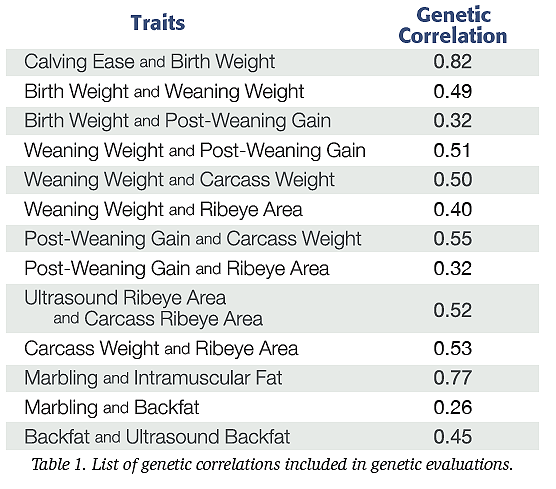 A similar example can be applied to mature cow size and early-in-life growth rates. Both of these examples are known as genetic antagonisms because a favorable result of selection in one trait (increased growth rate) leads to an unfavorable outcome in another trait (increased intake and larger mature size), which needs to be considered when making these decisions. However, there are also favorable genetic relationships that are selected. An example of this would be where the selection for reduced birth weight results in an increase in calving ease. Depending on the trait of interest, selection for one trait could result table 1 lists genetic correlations between different traits included in the current genetic evaluations.

While the above correlations are not the full list, they do represent some of the more common ones that are included in genetic evaluations and used for the current genetic evaluations for calculation of EPD. Ultimately, these help to use data and information across traits to improve the accuracy of the EPD estimates.

Ryan Boldt is currently director of Breed Improvement for the Red Angus Association of America. He resides just outside of Denver, Colorado. Boldt has received degrees in Animal Science from Texas Tech University and Colorado State University.

Editor’s note: This article was originally published in Red Angus Magazine and is reprinted here with permission.